Group News Back to All News

Over the last month, employees at Bradbury Group have been donating and raising funds as part of the Ukrainian appeal.

Over 18 million people are expected to be affected by the conflict, with 4 million people have already sought refuge in new countries, leaving behind their homes, belongings, and even their loved ones. The Group understands the importance of supporting the people of Ukraine in their time of need and wanted to do our bit to help.

In total, £430.55 and an abundance of supplies consisting of clothing, baby food, long-life food, medical supplies, toiletries, and nappies will be donated.

Donations to be sent to the border of Ukraine and Poland

Physical donations raised by Bradbury Group have been passed onto Ian Lawrence of the Lincolnshire Airsoft Club, who transports resources to the border of Ukraine and Poland to support the civilians in need.

Ian, his wife Michelle, and the “L.A.C.” team have done an amazing job by not only taking in donations but also developing their own, specialised version of the catastrophic bleed kit. These emergency first aid kits are typically designed to treat an individual who has suffered a wound that is causing life-threatening blood loss and can cost more than £100. However, Ian and his team have designed their kits to support up to FIVE people for the same price. Contents of these kits include medical equipment such as dressings, hydrogel, tough cut scissors, tape, surgical gloves, Bordeaux bags, and bandages. 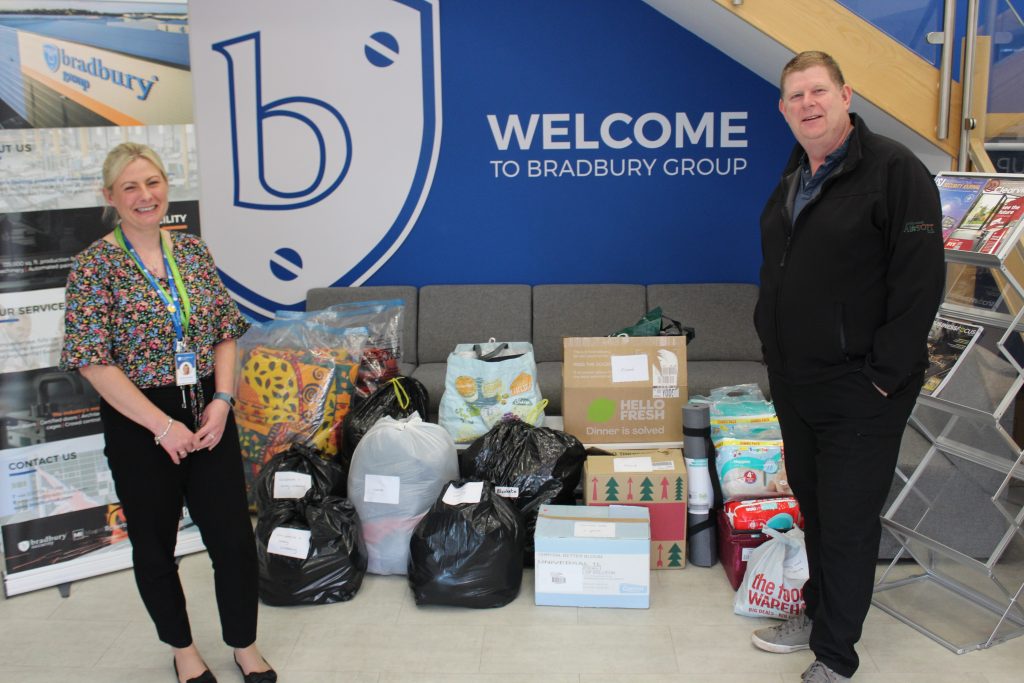 Aimee Burman, our HR & Payroll Coordinator has acted as our liaison with Ian and will remain in contact as we are still accepting donations to send to Ukraine. Ian and his team have been supporting the cause since the war began and will continue to do so; if you would like to donate, or have any questions for Ian and the L.A.C. team, you can direct your enquiries to ian@lincolnshireairsoftclub.co.uk.

The money raised by Bradbury Group has been donated to the Disasters Emergency Committee which is using the money to provide food, water, shelter, and healthcare, for the families who are fleeing from their homeland.

The Disasters Emergency Committee launched an emergency appeal to raise funds for civilians who were forced to flee from their homes on the 3rd of March 2022. Since then, they have raised over £260m.

During times of crisis, assistance is needed to protect and rebuild lives through effective humanitarian response. The Disasters Emergency Committee is made up of 15 of the UK’s leading aid charities, which aim to raise funds quickly and efficiently.

If you would like to learn more about the impact of war and what you can do to help, please visit dec.org.uk.

Thank you for Your Support

“We would like to thank our employees for their support and donations,” says Zane Dexter, Group HR Director. “They will help to provide families with essential items and will support those suffering as part of the ongoing war in Ukraine. I am extremely proud of our employees for stepping up to help at such short notice.”